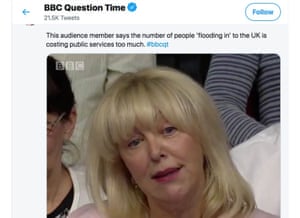 […] Much responsibility lies with a press that systematically incites bigotry against migrants, refugees, Muslims, benefit claimants and trans people: indeed, mainstream newspapers print bile that is not strikingly dissimilar from the Question Time rant. This includes “respectable” broadsheets such as the Times, which was belatedly forced to correct misleading coverage claiming a Christian child was “forced into Muslim foster care”. By the time the corrections were made, the damage had already been done.