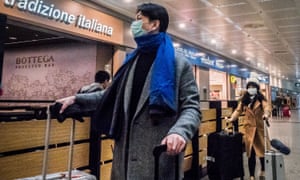 Chinese people in western countries where there have been cases of the Wuhan coronavirus have said they have been the target of racist abuse as paranoia mounts over the outbreak.In Italy, the European country with the highest annual number of Chinese tourists, the confirmation of two confirmed cases – a couple who arrived in Milan from Wuhan on 23 January on a lunar new year holiday – coincided with incidents of xenophobia and calls to avoid Chinese restaurants and shops.Roberto Giuliani, the director of the Santa Cecilia Conservatory in Rome, one of the oldest music institutes in the world, was criticised by colleagues on Wednesday after telling students from China, Japan and South Korea not to come to class until after a doctor had visited their homes to ensure they have not contracted the virus.La Repubblica published a photograph on its website showing a cafe near the Trevi fountain in Rome with a sign outside saying “all people coming from China” were barred from entering.

Source: Outbreaks of xenophobia in west as coronavirus spreads | World news | The Guardian